Q. What information do you have on the Ford Fleet and Marine Operations?

The Ford Fleet began in 1923 when the company ordered two 600’ ore carriers, the future M/S Henry Ford II and M/S Benson Ford, to be built. As those were being constructed, they also purchased two more vessels in 1924, the S/S Oneida and the S/S Onondaga which made their first sailings under Ford in May of 1924 with the Henry and Benson following in August. These ships were used to haul iron ore, lumber, coal, and other raw materials from the Ford plants in the Upper Peninsula and other material outlets. 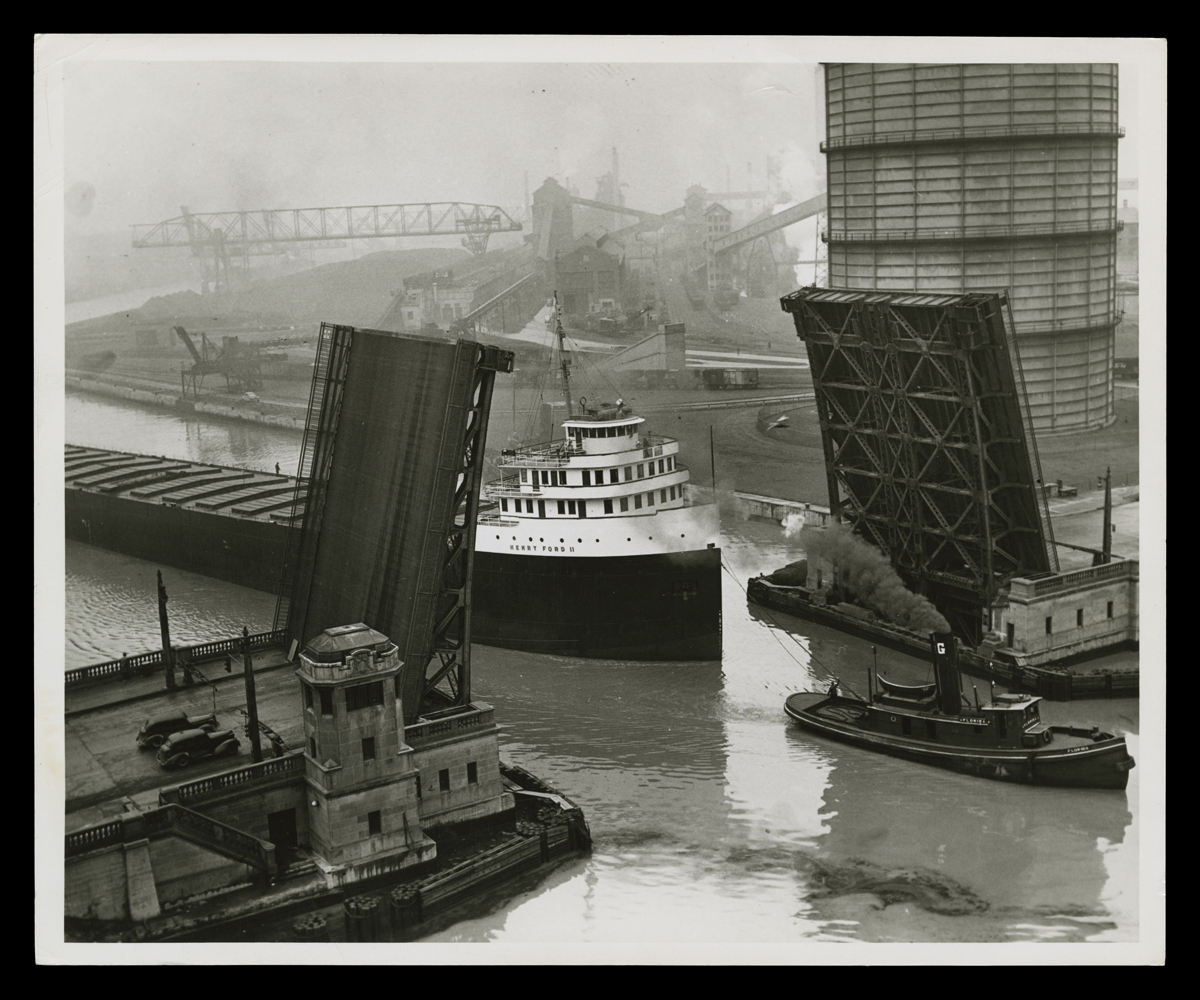 In 1925, the Ford Fleet expanded greatly with the addition of nearly 30 U.S. Government surplus boats from World War I purchased as part of the 199 boats. This group of vessels consisted mainly of lakers and tugboats, some of which were converted into barges or for ocean-going service. Also in 1925, the Marine Department was formed with Captain Oscar A. Johnson as superintendent.

The 1930s saw another expansion of the fleet with the addition of special built canal vessels, the S/S Chester, S/S Edgewater, M/S Green Island, and M/S Norfolk, to carry parts to and from the East Coast and on to European factories. The East Coast plants, which handled exports, handled the ocean-goers and had several lighters. While the main Marine Office was in Dearborn, the company also had a traffic department at Edgewater to handle export traffic. The 1930s also saw a downturn in marine traffic and cargo needs due to the depression and a number of the ships were idled during 1932-1935. 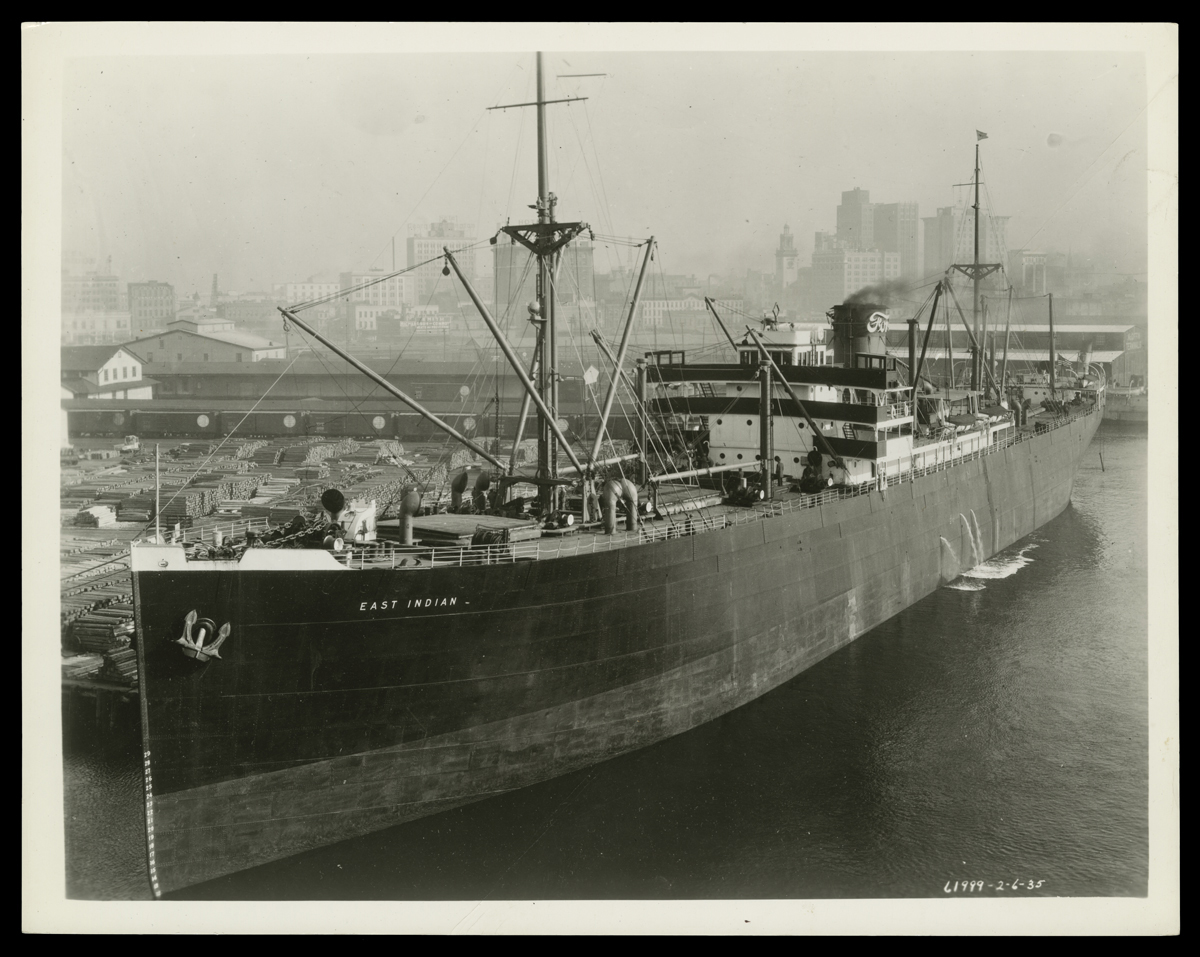 The fleet was used mainly for transporting raw materials, car parts, and knocked down vehicles, but the ships were also used in other ways. In 1928, Lake Ormoc was refitted with a machine shop, hospital, chemistry lab, water distillation equipment, library and living quarters and brought a group of Ford employees to Brazil to establish the Fordlandia plantation. The Henry II was often used by Henry and Clara Ford and their guests during the summer months. Later, Marine Department personnel were allowed to take a trip with their family onboard various ships, but the ships were never used for regular passenger service.

As World War II approached, the situation of the Ford Fleet began to change. When the Ford plant finally unionized in 1941, the sailors in the Marine Department did as well, with the National Maritime Union (NMU) however rather than the UAW and the officers remained non-union. When Ford’s European plants shut down for civilian production the ocean-goers were no longer needed to ship Ford parts so in 1941 the Ford Navigation Company was incorporated to handle the traffic of the four canal boats so they could be “common carriers” and carry non-Ford cargo to fill their holds, the company was dissolved 1946. The biggest change however started in 1941 when the U.S. government began compulsory chartering or sale of vessels from the fleet and over the next few years chartered or purchased all the ships from the fleet but the M/S Henry Ford II, M/S Benson Ford, and tug Dearborn. Over the course of the war six ships in the Ford Fleet were sunk and many crew members were lost. 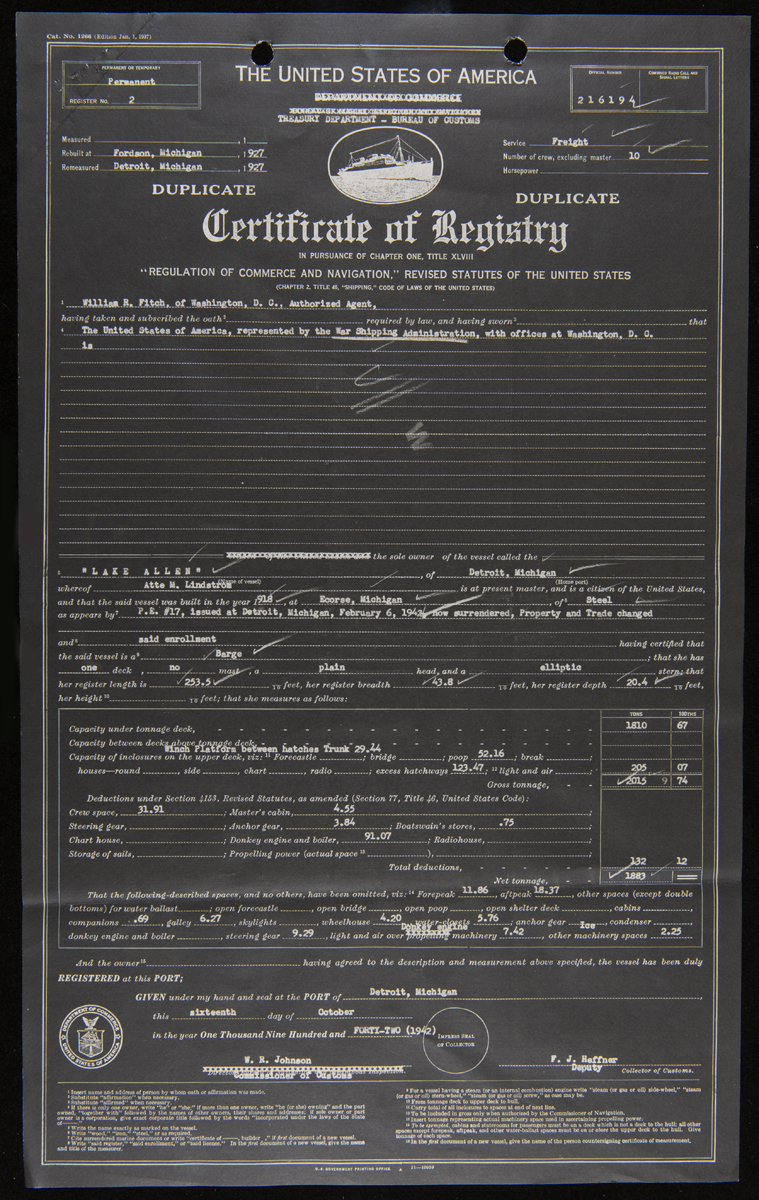 After the war, neither the U.S. Government nor Ford Motor Company needed the surviving ships. Ford had been chartering other ships during the war to carry their materials and it was unknown how much shipping capacity they would need post-war. The Marine Department decided to keep their big ore ships and eliminate the tugs and barges, selling off all but the M/S Henry Ford II and the M/S Benson Ford over the next few years. In 1945, the Traffic Department, including Marine Traffic, moved from the Administration Building to the B Building at the Rouge. Marine Operations was later transferred to the Transportation Department and office moved to the Transportation Garage.

By 1952, Ford Motor Company’s raw material needs had risen to over five million tons of coal, iron ore, limestone, dolomite, sand, pig iron, scrap, and bearings. They were using 15 different ship companies in addition to the M/S Henry Ford II and M/S Benson Ford to move cargo. It became clear that Marine Operations need to add more ships to the fleet. In 1953, the S/S William Clay Ford was added, sailing its first trip in August of that year. In 1957, Marine Operations was transferred to the Steel Division, with an office at the Rouge Office Building. In 1962, the fleet was further expanded with the S/S Ernest R. Breech and S/S Robert S. McNamara. With the addition of these two ships, the Ford Fleet was able to carry 84% of Ford’s tonnage. A new Marine Office Building was built at the Rouge Boat Slip in 1965 allowing for more direct access to shipping. Soon after, in 1966 the S/S John Dykstra was added to the fleet. 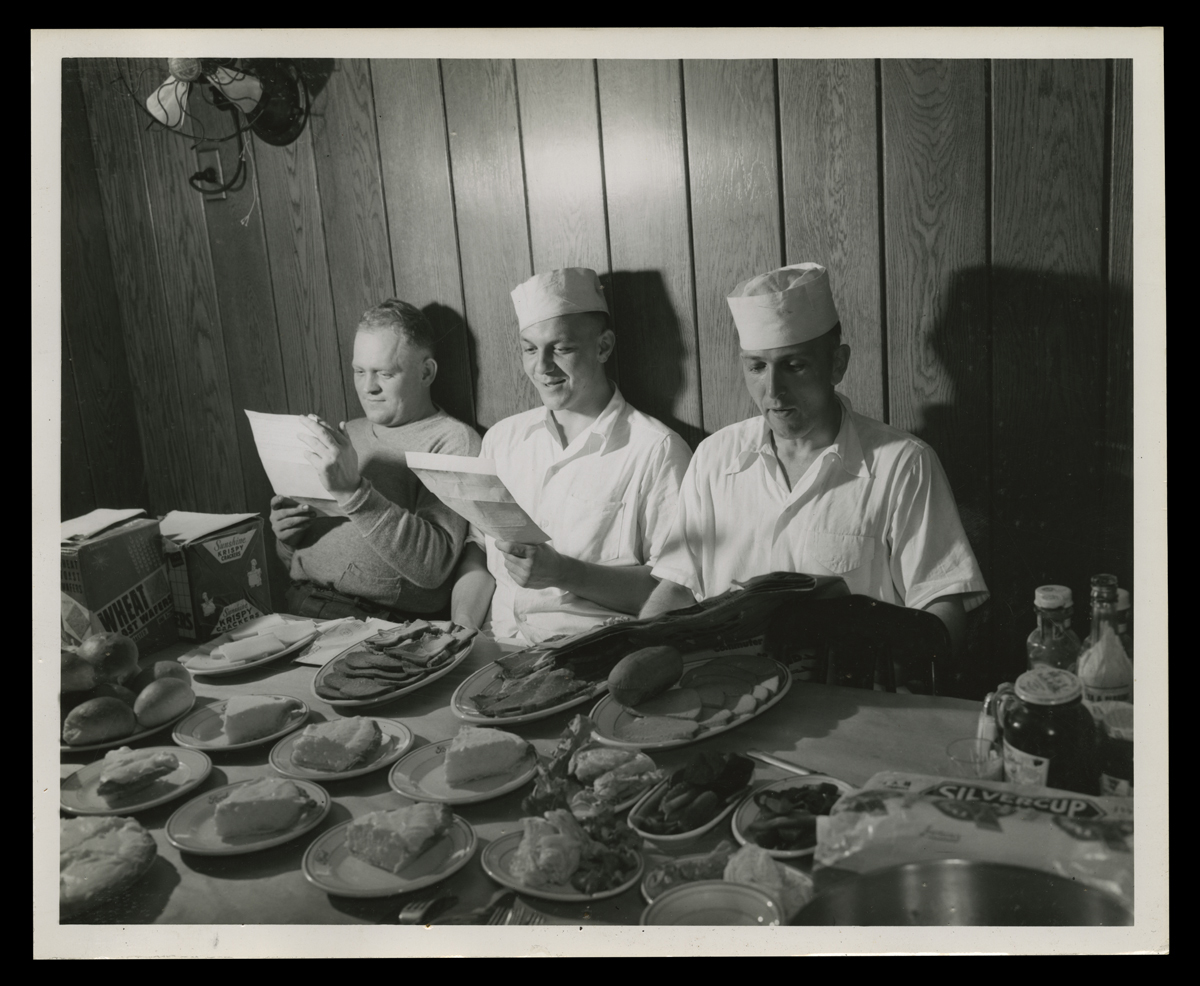 The ships were continually updated. In 1960 and 1961, new crew quarters were built on the M/S Henry Ford II and M/S Benson Ford. While both the Henry and Benson always had wireless radios, in 1948 these were replaced by ship to shore telephones. In 1953, both ships were outfitted with gyro compasses to provide more precise navigation and in 1958 VHF radio telephones were installed. Ship to shore telephones were installed in the Marine Office in 1966. In 1978-1979 the S/S William Clay Ford was expanded by 120’ to provide more cargo room. The Ford Fleet was also the first fleet on the Great Lakes to meet the Michigan Watercraft Pollution Control Act requirements in 1971. 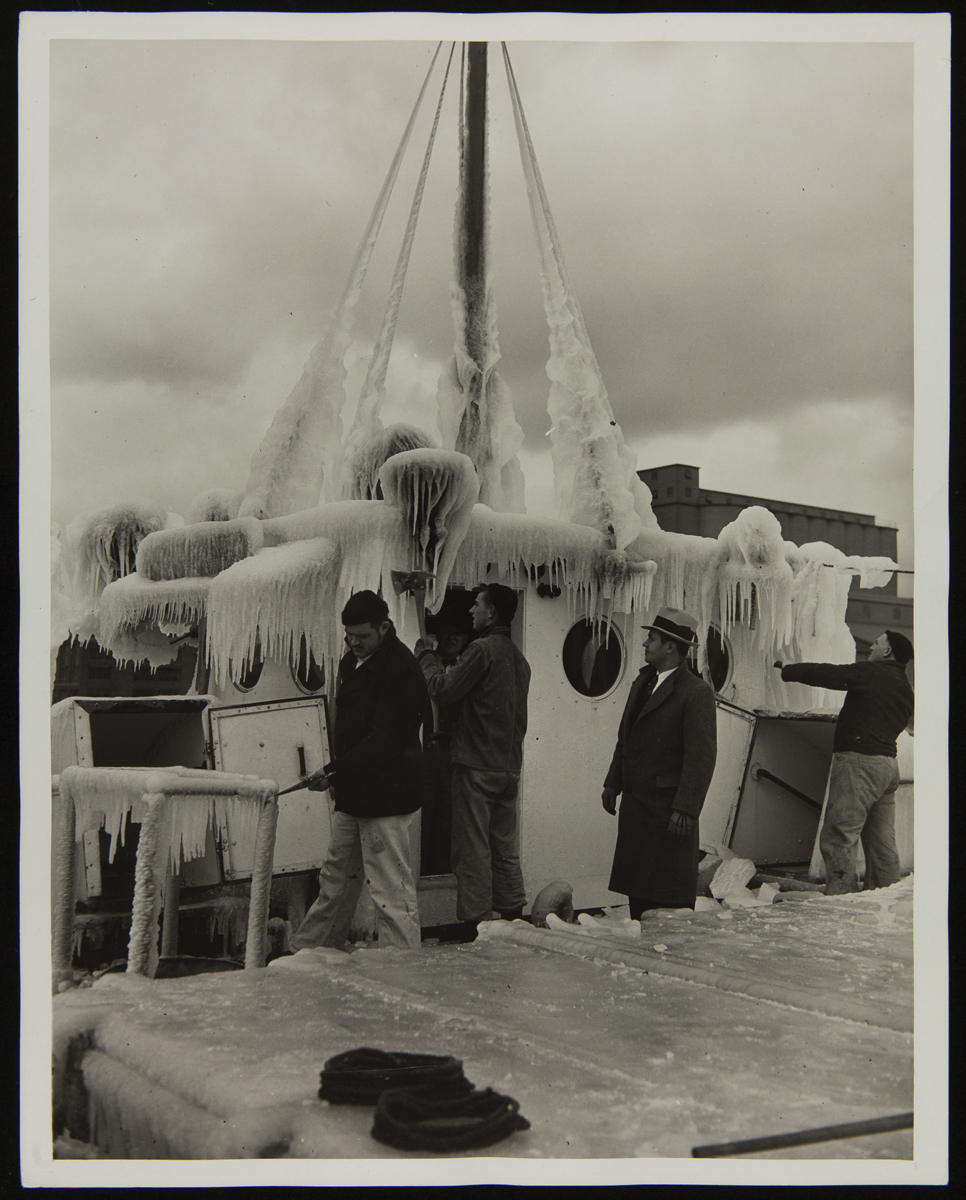 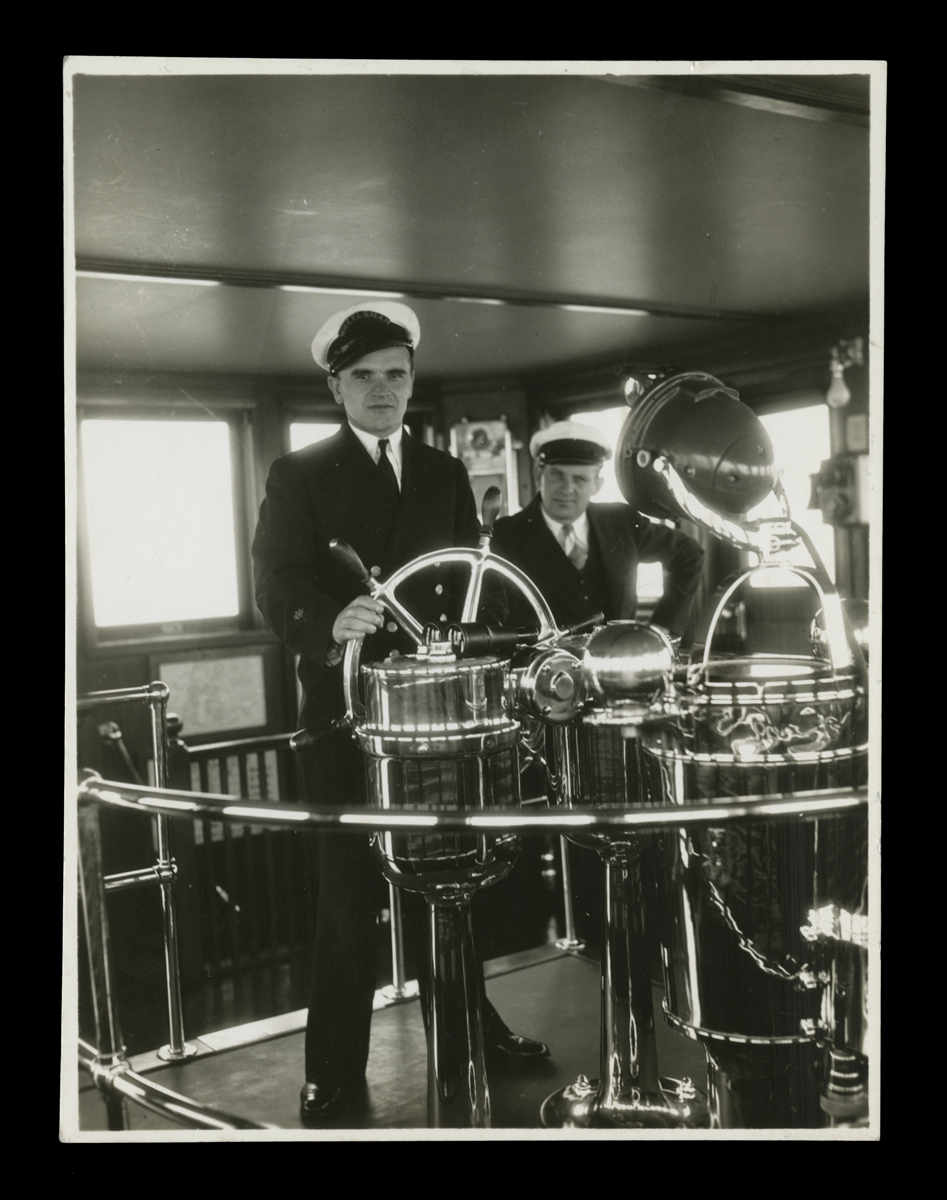 Operations continued profitable in the 1960s and most of the 1970s. At the opening of the 1975 shipping season, the fleet was capable of handling all Ford Motor Company’s requirements of iron ore, coal, and limestone. Any leftover cargo space was chartered out for a profit. In the 1980s, the company began to reevaluate fleet operations. Fuel prices for ships had been going up and rose even more in the 1980s and tons of ore shipped had been dropping steadily and by the early 1980s the fleet had excess cargo capacity. It was decided to sell off all the ships over the course of 1984-1989, and Marine Operations was closed down in 1989.

A few pieces of the ships live on. The pilot house of the M/S Benson Ford was converted into a cottage and the original S/S William Clay Ford pilot house was placed at the Dossin Great Lakes Museum in 1991.