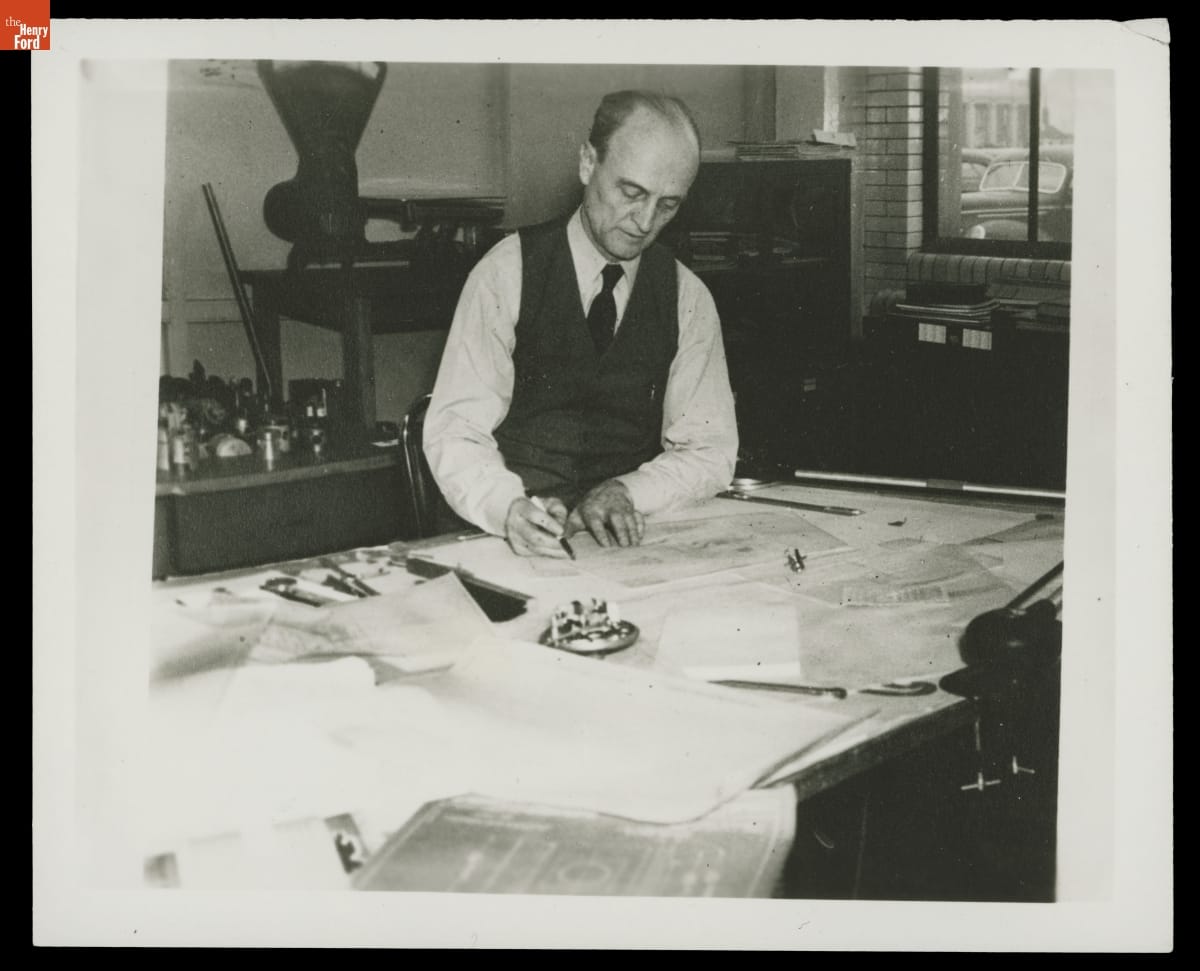 Eugene Farkas was hired into Ford Motor Company in 1907 to draw Model R and S production drawings, Farkas left the company soon after being hired because he wanted to work on experimental drawings. In 1908, he was rehired by Joseph Galamb, and worked on designing tools and fixtures for the Model T, but soon left the company again. Farkas was hired a third time, again by Galamb, in 1913 as the Head of the Experimental Drafting Room. One of his early projects was to design the chassis of the Edison-Ford electric car. In 1915, Farkas moved to the Ford tractor plant as Chief Engineer for the new tractor. During WWI, he designed a two cylinder engine to be used in a robotic bomb, and Ford’s three man 6 ton tank. In 1920, Farkas was charged with the design of Henry Ford’s pet project, the X engine, which he worked on for a number of years but it never developed into a useable engine. Farkas also worked out of his office in the Dearborn Engineering Laboratory on production methods for welding wire wheels, the four wheel brakes on the Model A, as well as a smaller 60HP V8 engine in 1936. During WWII, Farkas worked on updates to the B-24 bomber, designed a tank engine, and designed a 12 cylinder radial aircraft engine (which never went into production). Outside of auto design, Farkas often played his flute or piccolo for Ford’s public radio broadcasts and frequently participated in Ford’s old fashioned dances. Farkas retired in 1947. 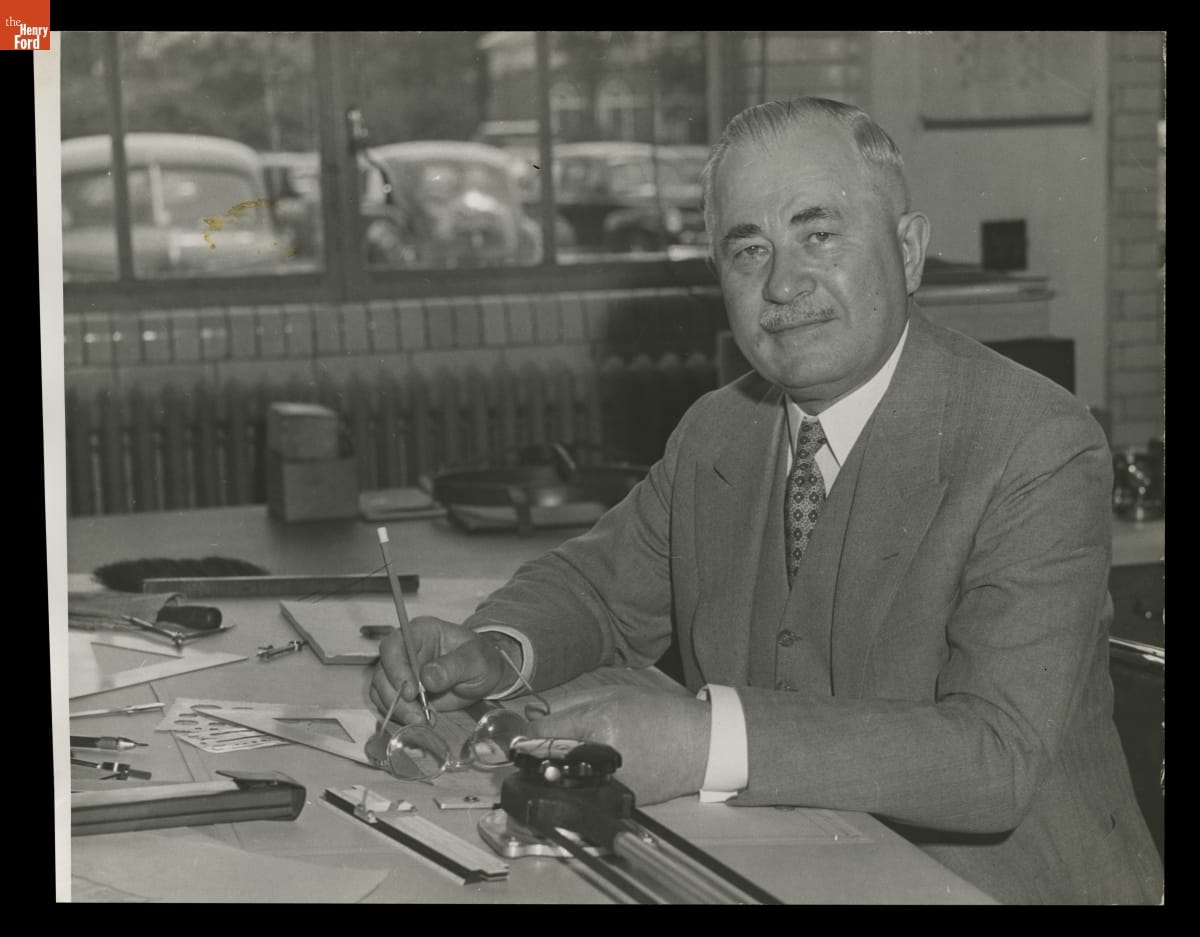 Joseph Galamb began his career at Ford Motor Company at the Ford Piquette plant designing parts for the Model N. Henry Ford soon put him to work on experimental work in a private drafting room where Galamb worked on the Model T design. In 1914, he was put in charge of the Engineering Department at Highland Park and was responsible for any changes to the Model T (with Ford’s approval). During WWI, he was in charge of building submarine detectors for the Eagle Boats and designed a two man tank. Galamb also split his time between Highland Park and the new tractor plant, working on Fordson tractor development. After 1923, he had an office in the Dearborn Engineering Lab and throughout the 1930s had automotive body and frame design responsibilities. Galamb retired in 1944 due to poor health. 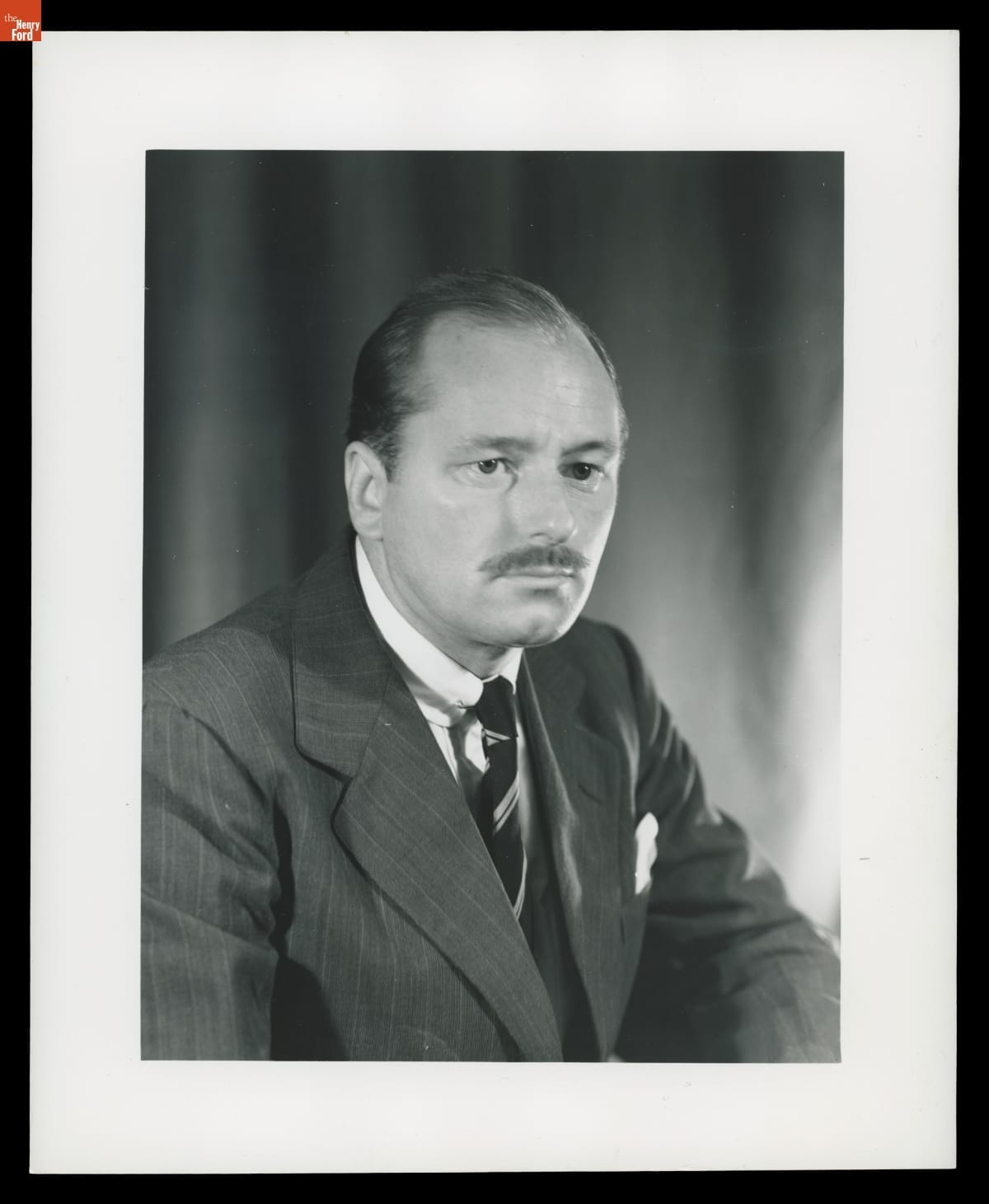 E.T. Gregorie was hired by Edsel Ford in 1932 and initially worked under Lincoln’s Chief Body Engineer, Henry Crecelius, at the Dearborn Engineering Laboratory designing Lincoln cars and custom bodies. In 1935, Gregorie was appointed head of the company’s new Design Department. Gregorie worked closely with Edsel Ford on vehicle design, with his most noted cars being the 1936 Lincoln Zephyr and 1939 Lincoln Continental. Gregorie built up the Design Department and introduced a number of innovations to vehicle design including the styling bridge for creating patterns from models. In addition to company cars, Gregorie designed a few personal cars for Edsel Ford including a 1932 boat tail speedster, as well as Henry Ford II’s beach wagon. Gregorie continued to work with Edsel Ford throughout WWII working on some war work but also beginning post war styling designs. After Edsel Ford passed away, Gregorie left the company, but returned for a few years during which time he designed the 1949 Mercury. Gregorie left Ford Motor Company in 1947.

Key resources:
Reminiscences of E.T. Gregorie
Edsel Ford and E.T. Gregorie : the remarkable design team and their classic Fords of the 1930s and 1940s. by Henry L. Dominguez 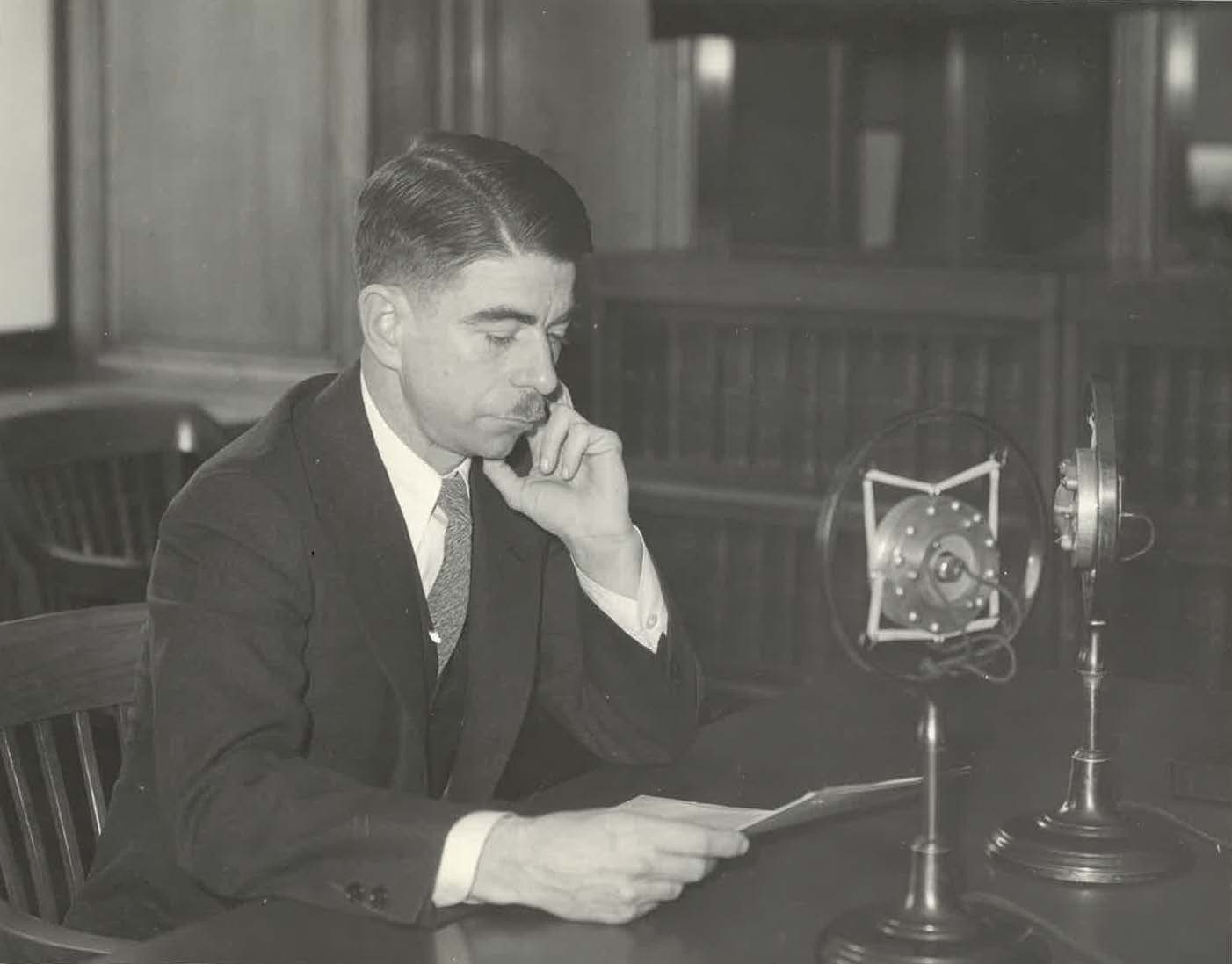 Hud McCarroll started working for Ford Motor Company at the Highland Park plant in 1915 as a Chemical Engineer on problems relating to car finishes, abrasives, and lubricants. He transferred to the Rouge around 1920, with his work there involving the blast furnaces, coke ovens, and foundry operations. McCarroll developed methods to use the by-products from Ford Motor Company operations in the coke ovens resulting in products including ammonium sulphate and benzol which Ford eventually sold through dealers. By 1925, he was Ford’s Chief Chemist in charge of all chemical and metallurgical research with a laboratory at Gate 4 at the Rouge and was also responsible for all Ford testing laboratories. McCarroll and his assistants developed special alloys of steel and iron and he became a well-known metallurgist. In 1928, Ford sent McCarroll to Sumatra to investigate rubber production. He was also involved in the development of industrial use for farm crops, representing Ford Motor Company at the first Dearborn Conference of the National Farm Chemurgic Conference in 1935. During WWII, he worked with the Pratt-Whitney engine contract taking responsibility for all lab tests required by the contract. In 1947, he was appointed Director of Chemical and Metallurgical Engineering and Research. McCarroll died in 1948. 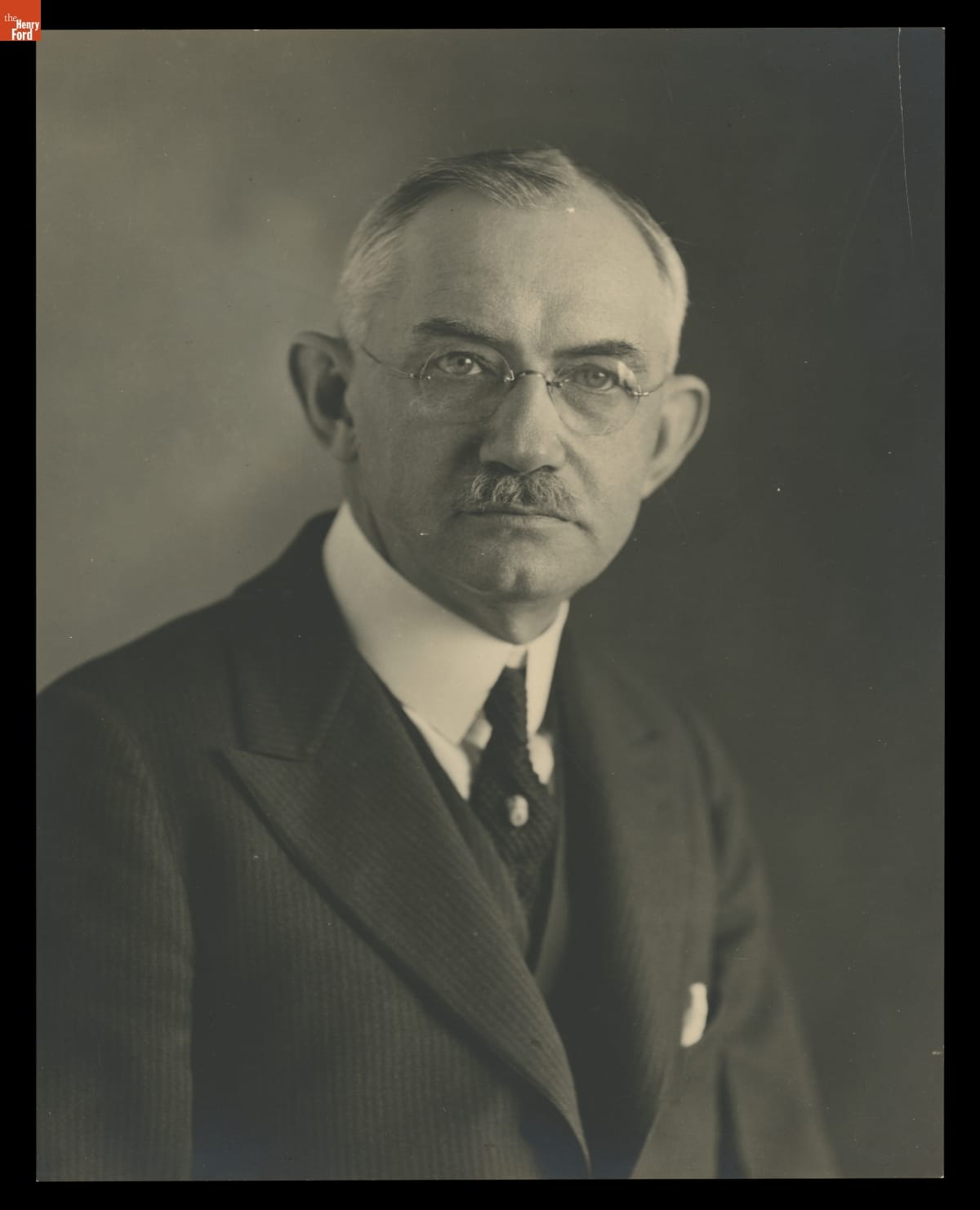 William B. Mayo was hired into Ford Motor Company around 1913-1914 as Chief Power Engineer. He first worked on the installation of the nine gas-steam units at the Highland Park plant. In 1917, Mayo was given charge of planning and construction of the Rouge. Mayo also worked on several confidential projects with Henry Ford including assessing areas of the Upper Peninsula for lumber opportunities in 1920, and handling negotiations on Muscle Shoals. In 1922, Mayo was one of the chief negotiators in the purchasing of the Lincoln Motor Company. When Edsel Ford became president in 1919, Mayo became Edsel’s chief consultant. Mayo was named Chief Aircraft Engineer in 1919 and eventually headed the Aircraft Division. Under his direction, the company developed and built the trimotor, opened an airport, started a radio beacon, established regularly scheduled mail flights, passenger and freight service, an airport hotel, and built a mooring mast. Mayo retired from Ford in 1932. 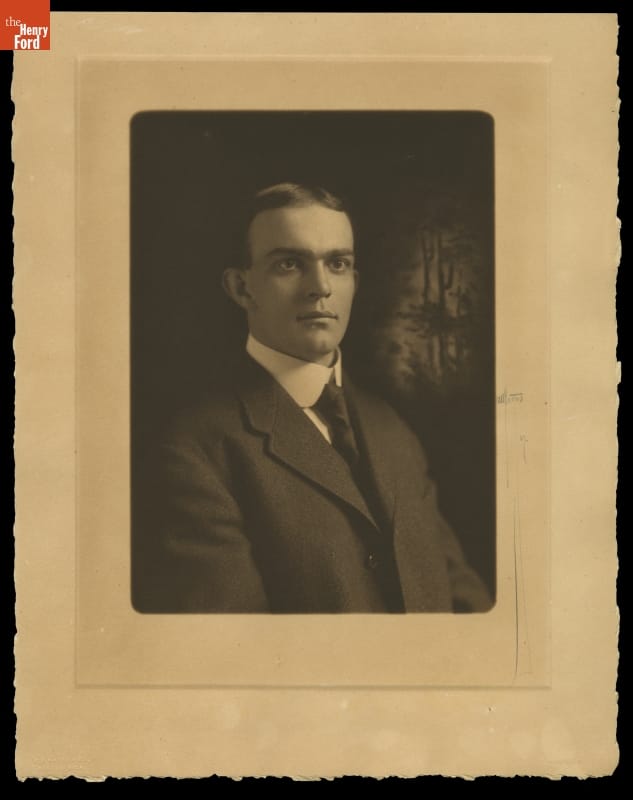 C. Harold Wills worked for Henry Ford before he started Ford Motor Company. In 1899 he worked as Ford’s assistant, and later as a draftsman for the Detroit Automobile Company. Wills helped Ford build the 999 and Arrow race cars as Ford was gearing up to start his new auto company. When Ford Motor Company was established, Wills continued working with Ford at the Mack Ave plant as Chief Designer, Engineer, and Metallurgist. Wills designed the Ford script for the logo as well. When the Ford Manufacturing Company was formed in 1905, Wills served as Secretary. During WWI, Wills had charge of the Liberty Engine production effort overseeing the building of 3940 engines. Wills resigned from the company in 1919.