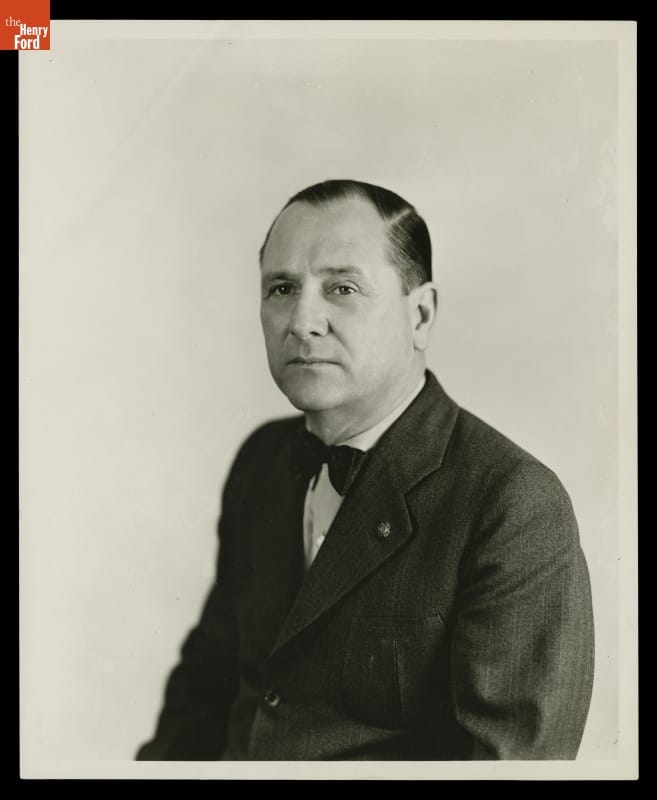 Harry Bennet first began working at Ford Motor Company in 1916 in the Motion Picture Department. After several months, Ford hired him to keep an eye on operations at the Rouge plant for him, heading up the Service Department (though having no official title) and reporting directly to Ford. Under Bennett, the Service Department grew to about 3,000 employees. Bennett managed the Rouge Employment Office as well and in 1921, abolished the Sociological Department. Bennett promoted the hiring of the formerly incarcerated, which was in line with Ford’s overall views on rehabilitation through employment, and former athletes. Much of Bennett’s work included union busting activity and removing suspected pro-union employees. He was in charge of the Service Department during the Ford Hunger Strike in 1932 and the Battle of the Overpass in 1937. In 1943, he was named to the Board of Directors, and in 1944, Bennett was named General Supervisor of all Personnel, Labor Relations, and Public Relations. He resigned in 1945. 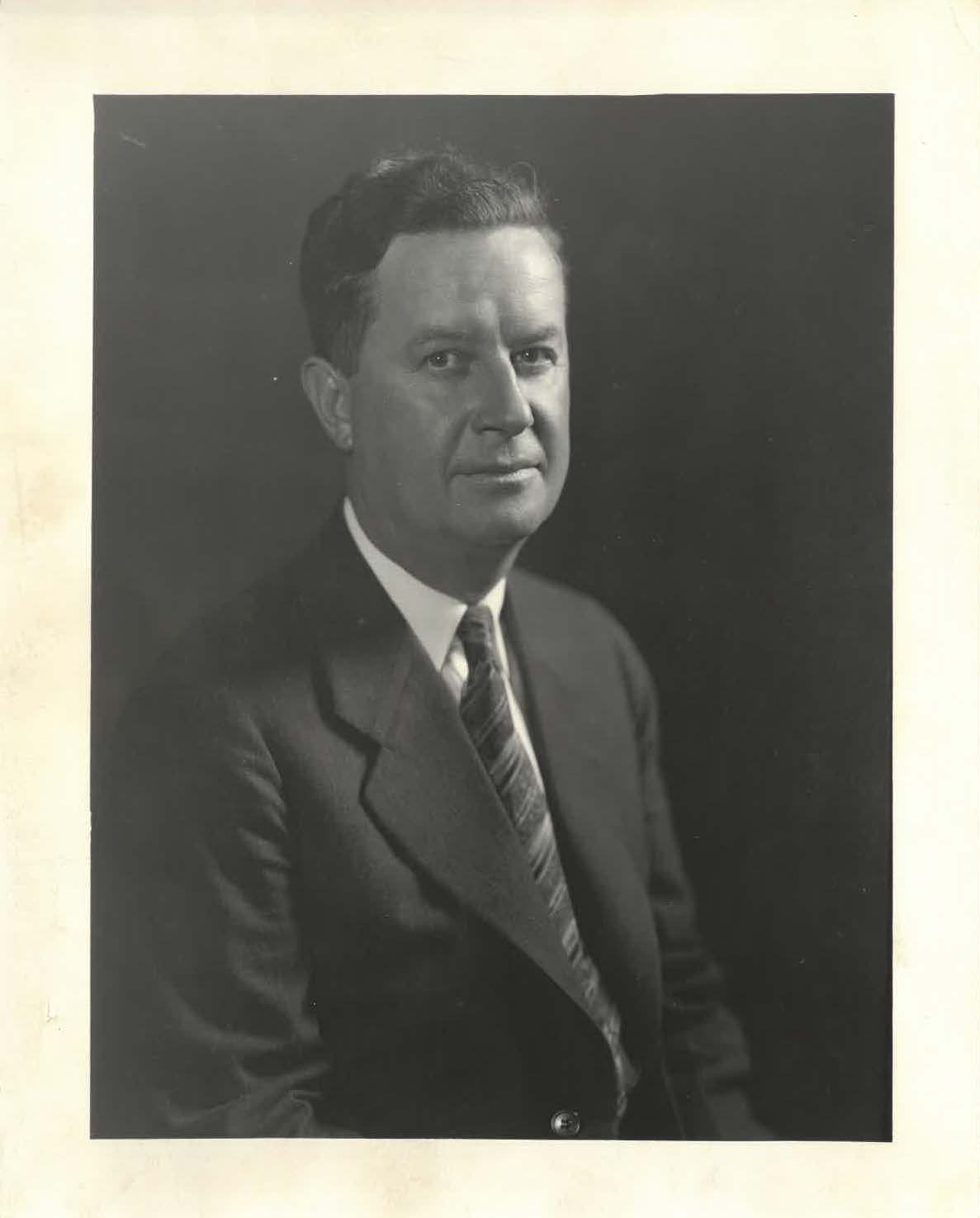 Frank Campsall started working at Ford Motor Company as a Clerk/Secretary in the Purchasing Department at the Highland Park plant in 1912. Around 1922, he was transferred to Henry Ford’s office as a Secretary. When Ford purchased the Wayside Inn, Campsall was put in charge of supervising the purchase, restoration, and operations of the inn, spending much of his time from 1922-1938 on the project. Over the years 1925-1946, he represented Ford in the purchase of the Richmond Hill, GA property, oversaw the shipping of goods to and from the property, and accompanied the Fords on their winter holidays there. Along with Ernest Liebold, he executed Ford’s vision for the Henry Ford Hospital and Dearborn Country Club. Campsall assisted the Fords in travel, personal correspondence, and other personal plans and affairs, including arranging the old-fashioned dances the Fords enjoyed. He also coordinated Ford’s charity work including Mount Berry Schools, rehabilitation of war veterans, gifts of cars and tractors, and his work with George Washington Carver relating to the Tuskegee Institute. In 1943, he was made Assistant General Manager and was appointed to the Board of Directors of the company and it was Campsall who prepared and handled the signing of Henry Ford’s letter of resignation in 1945 when Henry Ford II became president. Campsall died in 1946 at Richmond Hill while on a trip with the Fords. 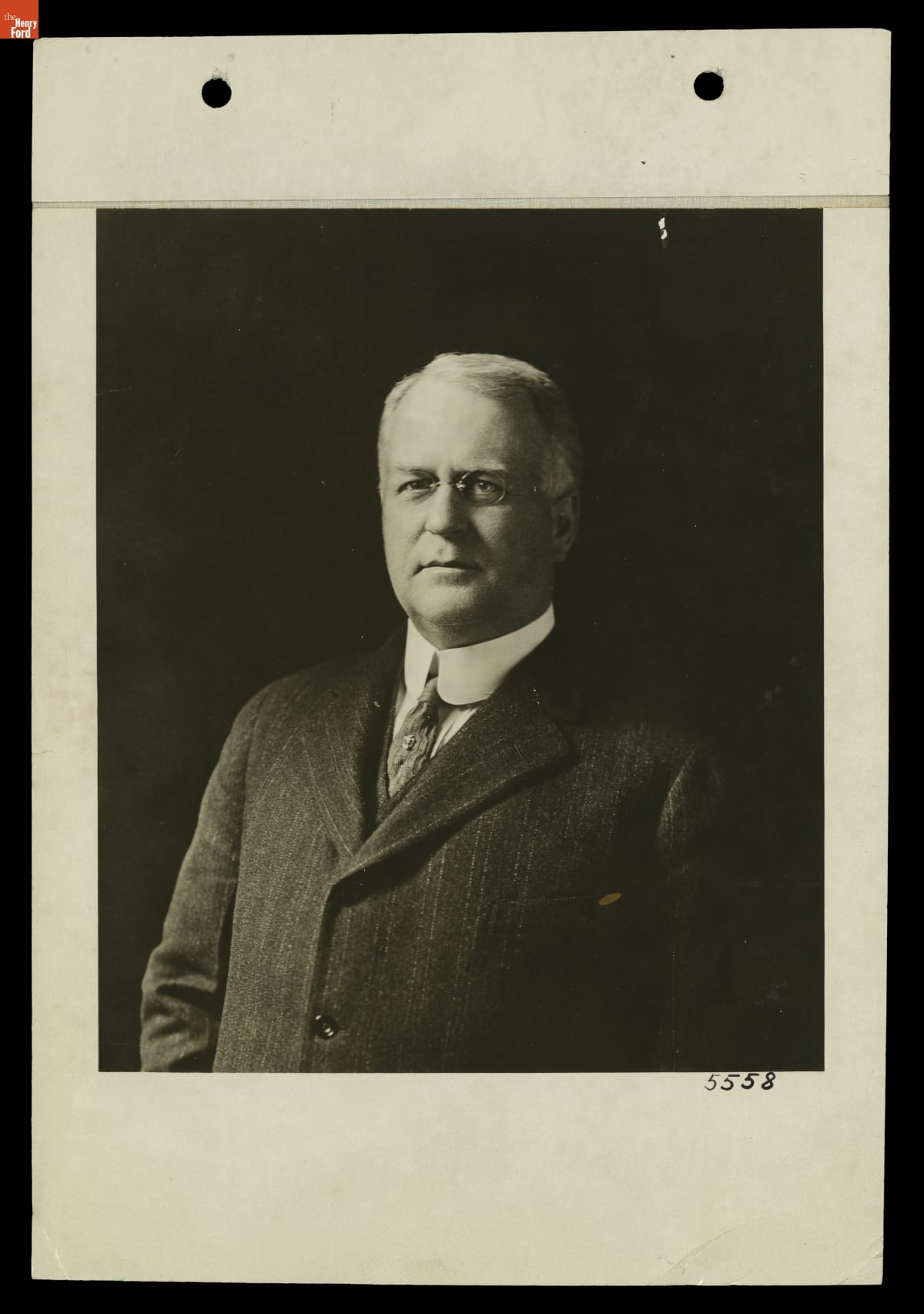 James Couzens had an early association with the company as an initial stockholder. He was named Secretary of the company when the Ford Motor Company was formed in 1903. In 1906, Couzens became General Manager handling the business end of the company while Henry Ford focused on manufacturing. Couzens played a key role with Ford in establishing the eight-hour work day, $5 dollar day, and also establishing the Sociological Department. In 1915, Couzens resigned as General Manager but stayed on the Board of Directors. In 1919, Ford bought out all the stockholders including Couzens, ending his time with the company. 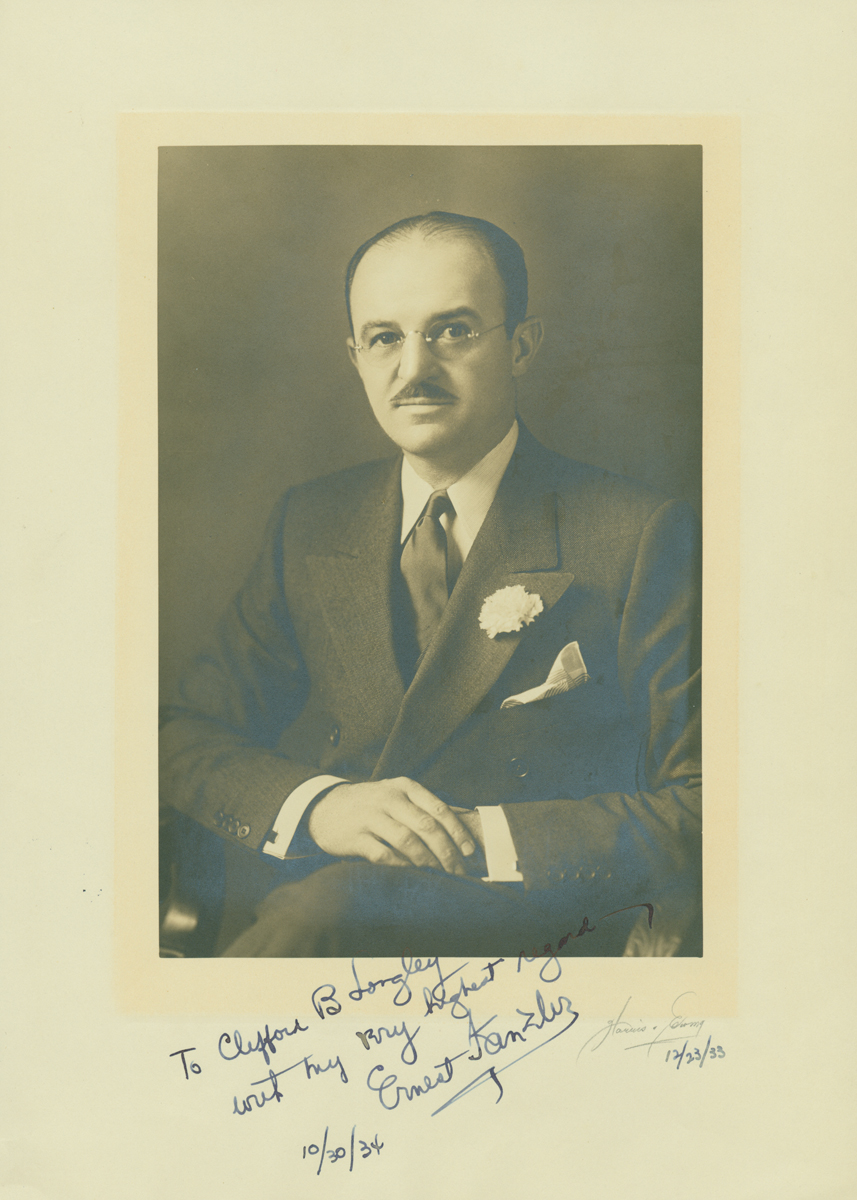 Ernest Kanzler was hired to work with Charles Sorensen at the Dearborn Tractor Plant in 1916, handling scheduling and shipment. Kanzler played a key role in streamlining incoming parts, assembly, and shipments to increase efficiency. In 1920, he was made Production Manager at Highland Park. In this role, he lowered the price of the Model T, minimized standing inventory, and cut inventory float. When William Knudsen left the company in 1921, Kanzler took over the assembly branch plant program, adding 31 branch factories. Also in 1921, he became a director of Ford of Canada. In 1923, he was named a Vice President of Ford Motor Company and its subsidies, Vice President of Lincoln, and a Director of the Detroit Toledo & Ironton Railroad. From 1923-1925, Kanzler managed manufacturing directly under Edsel Ford during which time Model T production rose to more than 2 million annually and production costs and prices hit their lowest ever. In 1926, with Model T sales falling rapidly, Kanzler wrote a letter to Henry Ford outlining need for a new model, it was not met with enthusiasm by Ford who wanted to keep producing the Model T. Kanzler resigned in 1926. 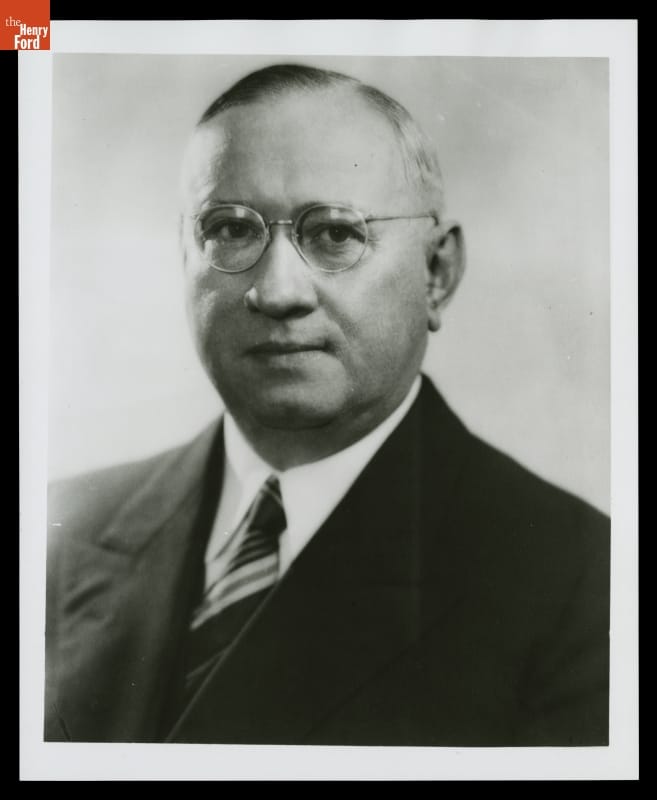 Ernest Liebold began working for Henry Ford when Ford bought the Lapham Bank in Dearborn in 1911. In 1913, he started working as Ford’s secretary with an office at the Highland Park plant. His responsibilities and tasks performed for the Fords increased and he became their Power of Attorney in 1918. He often represented Ford in his business affairs through correspondence, but also in meetings across the country. When Ford decided to build the Henry Ford Hospital, he put Liebold in charge of the construction, hiring, and later operations of the hospital. Liebold was also General Manager of The Dearborn Independent from 1919-1926, later becoming Vice President and Treasurer until the paper shut down in 1927, and along with William Cameron reviewed and approved content for the paper. When Ford purchased the Detroit Toledo & Ironton Railroad, Liebold served as Vice President from 1920-1929, managing the railroad for Ford. He served as President of Dearborn Realty and Construction from 1919-1943, a company which carried out Ford’s plan to build 250 houses in Dearborn and other building ventures in the area. After 1923, Liebold moved his office to the Dearborn Engineering Laboratory’s “Mahogany Row” and continued his work there. When Ford decided to build a country club in Dearborn, he called on Liebold to develop and manage the Dearborn Country Club from 1925-1944. Liebold took on less responsibility in the company after 1933 though he still continued to play a role. He retired in 1944. 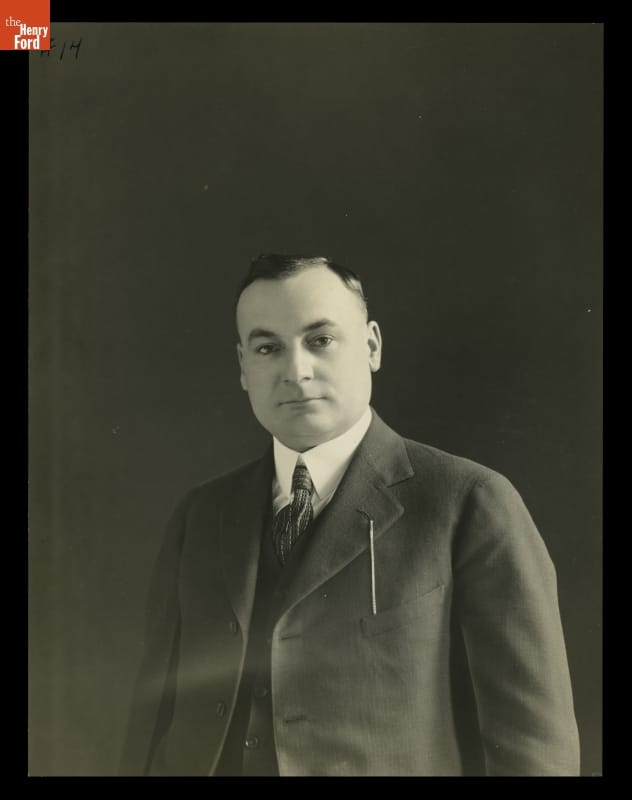 Peter Martin was hired by C. Harold Wills in 1903 and began work at the Mack Ave. plant in the Experimental Room. By 1905, Martin was in charge of the night shift for the Experimental Room at the Piquette Plant.  In 1906, he was named head of the Assembly Department at the Piquette Plant, and later that year was made assistant to Thomas Walburn who was the head of all the manufacturing plants for the company. In 1908, with others, he was responsible for reorganizing the physical plant, labor force, and production method to launch the Model T. In 1913, Martin worked with Clarence Avery, Charles Sorensen, C.H. Wills, and Henry Ford to start the moving final assembly line. Martin continued to move up in the company working primarily at the Highland Park Plant. In 1919, he was appointed General Superintendent of Production and in 1924 was named First Vice-President in charge of Manufacturing. Martin resigned as Vice-President and a Director of Ford Motor Company due to poor health in 1941. 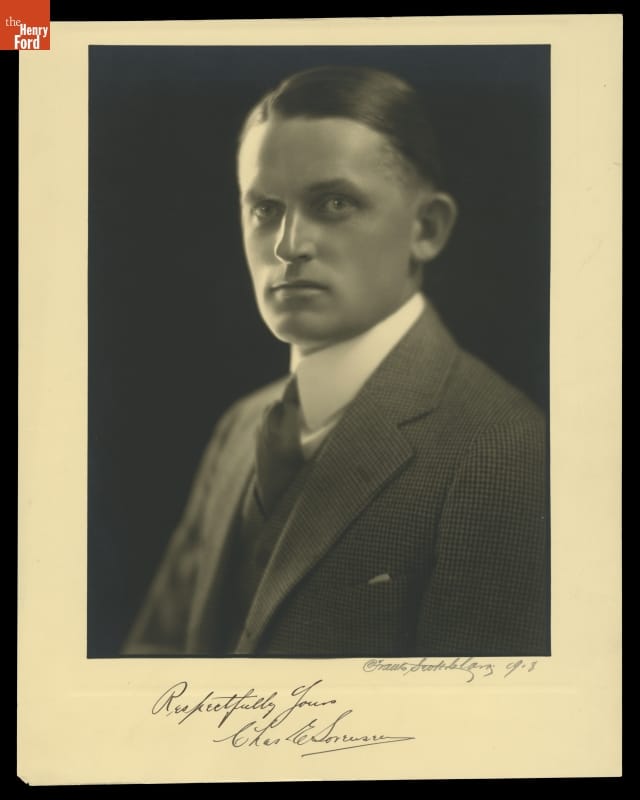 Charles Sorensen began his career at Ford Motor Company as an experimental pattern maker at Ford’s Piquette Ave. plant in 1905, becoming head of the Pattern Department by 1907. Over the ensuing years, Sorensen gained more and more influence and responsibility in the factory and company. His foundry expertise resulted in cost cutting innovations and earned him the nickname “Cast Iron Charlie,” though some also used it to refer to his tough managerial style. In 1915, Sorensen was put in charge of the Fordson Tractor Plant in Dearborn, overseeing war time manufacturing and commercial production. After the Rouge was ready for production in 1919, Sorensen moved tractor production there and took charge of plant and though Ford had no formal titles or true organizational charts, Sorensen took on the responsibility and leadership of the Chief Production Manager role. By 1926, Sorensen was also in charge of Foreign Branch Operations and took several trips abroad to evaluate the international plants. In 1941, he was asked to serve on the Board of Directors and also served as Executive Vice President. During WWII, he oversaw the building of Pratt and Whitney engines and was integral in the planning, design, layout, and start-up of the Willow Run plant building B-24 bombers. After Edsel Ford’s death in 1943, Sorensen was elected Vice President. He resigned from Ford Motor Company on in 1944.