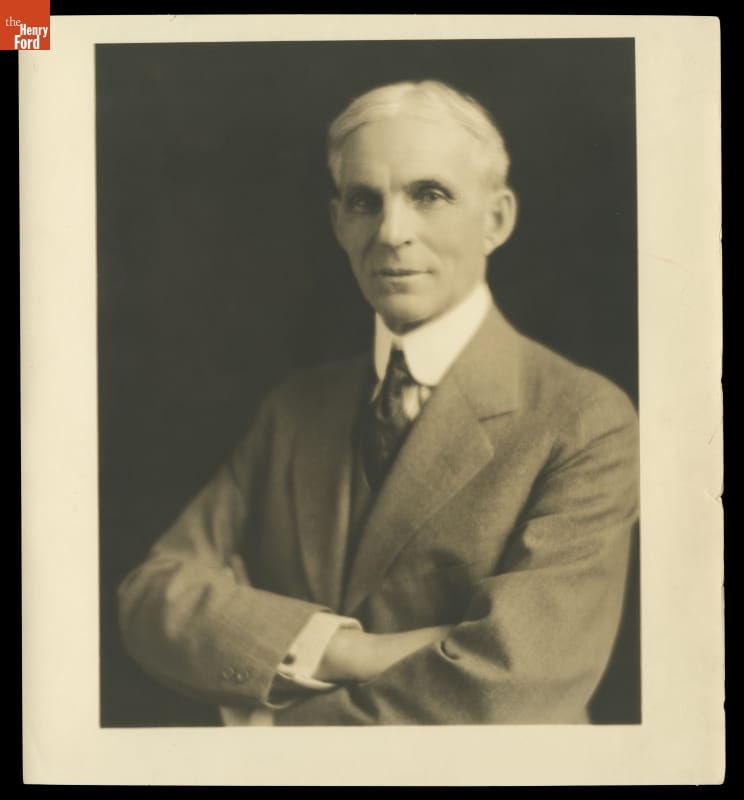 Henry Ford had founded two unsuccessful car companies before starting Ford Motor Company in 1903. In the early years of the company, Ford introduced a number of vehicles, Models A, B, C, F, K, N, R, S, and finally his most successful, the Model T. Ford’s goal was to make the least expensive car he could to enable the most people to own a vehicle and continually dropped prices for the Model T as production methods became more efficient. Ford also focused on worker welfare and introduced the $5 day in 1914 as well as the Sociological Department. Ford was a big believer in education and founded the Henry Ford Trade School in 1916 to train young men, an Apprentice School, and an English School to teach the many immigrant workers at Ford English as well as American cultural customs. In 1919, after internal battles with the stockholders over expansion plans, Ford resigned as president and bought out the stockholders so he, his wife Clara, and son Edsel could have complete control over the company. As owner of the company, Ford focused on vertical integration, use of by-product materials, use of farm produce in industrial applications, and acquiring land to provide raw materials for production. Ford also experimented with decentralization through the Village Industries program, where certain manufacturing or assembly would be done in small plants scattered throughout southeast Michigan. Ford was known for his anti-union stance, which led to many altercations with workers over the years, and in 1941 amid pressure from Edsel and Clara Ford, Henry finally agreed to sign a UAW contract. Though Ford was a pacifist, the company did manufacture for the war effort when the United States was involved in both World War I and World War II. When Edsel died in 1943, the aging Henry Ford took over as president, although his health was declining. He resigned in 1945 and his grandson, Henry Ford II, took over as president. 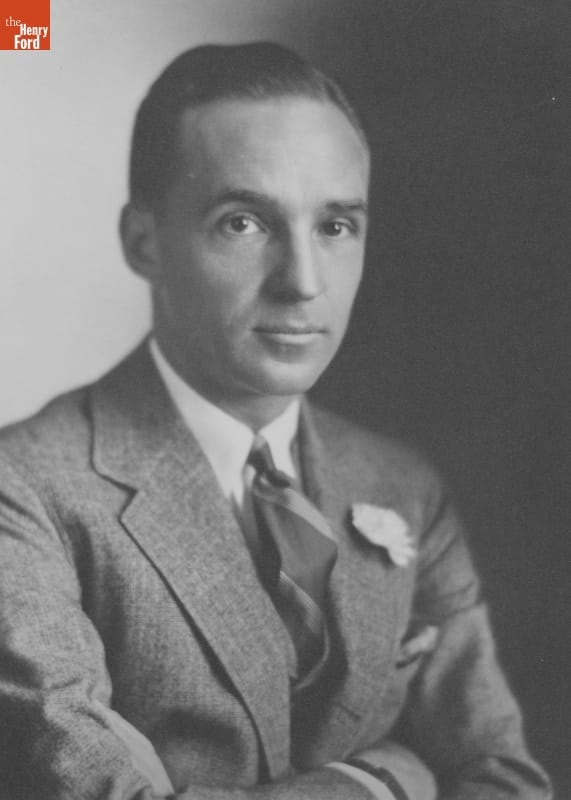 As Henry Ford’s only son, Edsel was often seen around the Ford plants doing small jobs from his early youth. His first official job at the company after graduating high school, was keeping inventory of items at the Highland Park plant. After James Couzens left the company in 1915, Edsel was named to the Board of Directors and he and Treasurer Frank Klingensmith managed the business affairs of the company including several war time contracts. In 1916, he was named Secretary of the four man Executive Committee. In 1919, at age 25, Edsel became president of the Ford Motor Company after Henry Ford resigned from the position. While Henry remained in charge of many decisions and Edsel always yielded to his wishes, over the years Edsel pushed the company to produce more stylish cars, focus on better advertising, and develop payment plans. In 1922, Ford Motor Company acquired Lincoln Motor Company and the division became a major focus for Edsel, who played a big role in the development and design of the Lincoln vehicles, particularly the Zephyr in 1937 and the Continental in 1940. Edsel had an eye for design and was instrumental in the design and introduction of the Ford Model A, the much needed and more stylish replacement for the Model T. With a keen sense of business, Edsel also championed for an intermediate vehicle line between the Ford and the Lincoln and introduced the Mercury in 1938. Edsel also had a strong interest in aviation, pushing to purchase the Stout Metal Airplane Company to further aircraft development at Ford Motor Company, he supported air speed races and air reliability tours, and was a major sponsor of Admiral Byrd’s expeditions to the North and South Poles. During World War II, Edsel worked closely with Charles Sorensen and the government to maximize Ford’s wartime production and contribute to the war effort. The company manufactured for several war time contracts including B-24 bombers, Pratt-Whitney aircraft engines, jeeps, military trucks, tank engines, amphibious cars, armored cars, and other military items. Edsel died in 1943 at the age of 49 and Henry Ford resumed the presidency. 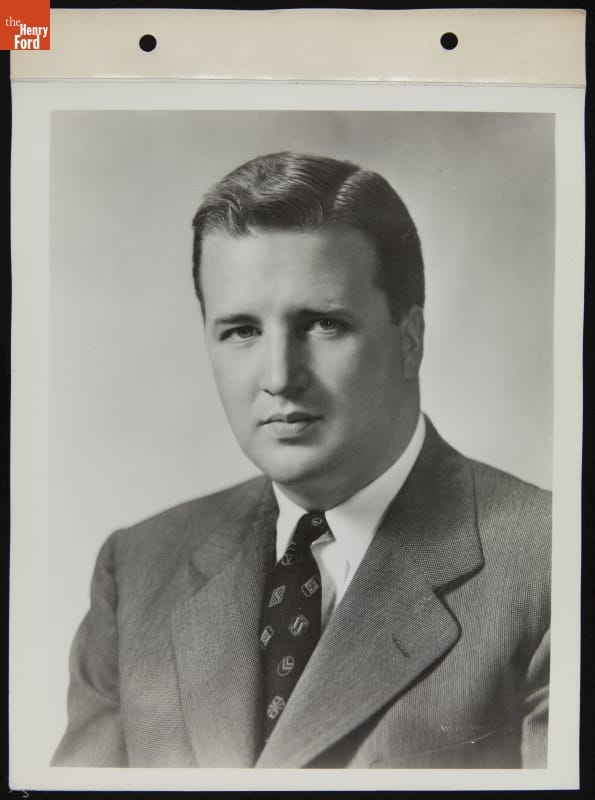 The eldest son of Edsel Ford, Henry II grew up around the Ford organization. He first began working for the company in 1940 in the Dynamometer Room in Dearborn, later working at the Rouge, and the Engineering Test Garage. In 1941, Henry II took a leave from the company to serve in the Navy during World War II. When Edsel passed away in 1943, he was released from duty from the Navy to return to the company and was elected a Vice-President, and in 1944 was made Executive Vice-President. In 1945, with pressure from Clara Ford and Eleanor Ford, Henry Ford resigned as President of the company and 28-year-old Henry II was named President. In his early years as President, Henry II is credited with turning the company around and modernizing manufacturing, production, and accounting to return the company to profitability. He was able to achieve this by bringing in new executives from within and outside the company including Ernest Breech, John Bugas, Lewis Crusoe, and the Whiz Kids. Under Henry II’s presidency the company became a publicly traded corporation in 1956. He oversaw a few largely successful vehicle introductions in the Thunderbird, Falcon, and Mustang, but also a flop in the Edsel. Henry II also championed the Ford racing program, leading the company to their successful GT40 program and wins at Le Mans. Henry II expanded and modernized plants across the US and the world and oversaw the building of the Research and Engineering campus as well as the new World Headquarters building in Dearborn. In 1960, Henry II stepped down from the presidency but remained Chairman of the Board until 1980, formally retiring from the company in 1982. 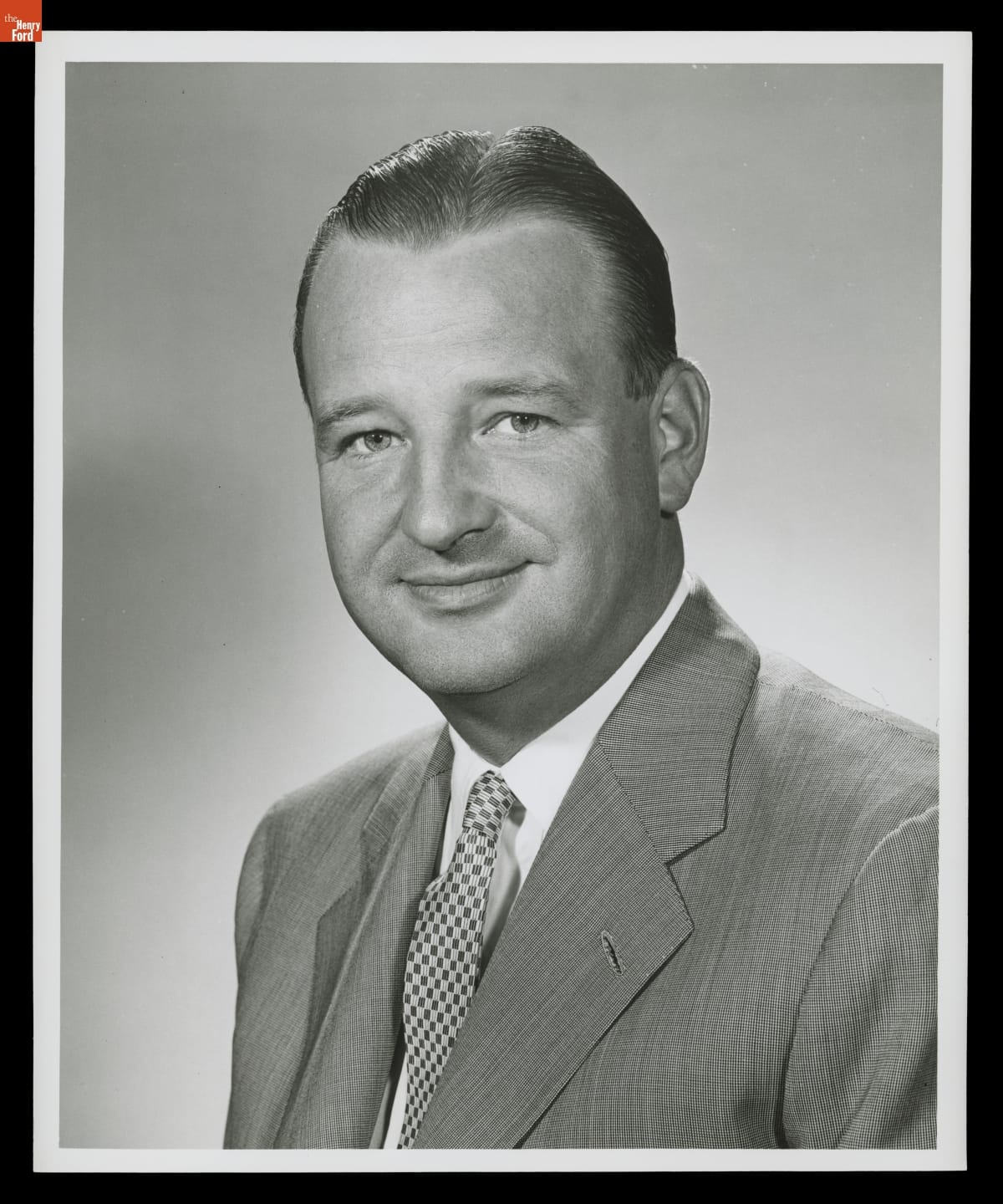 The second son of Edsel Ford, Benson grew up around the Ford organization along with his brother Henry II. In his early years working at Ford, his first assignment was in the Experimental Garage at the Engineering Laboratory and he later moved around to different departments, learning as many aspects of the company as possible. During this time, he helped build one of the company’s first experimental jeeps along with his brother, Henry II. In 1942, Benson took a leave from the company to serve in the Army Air Corp during World War II. Benson returned to Ford in 1946, and was named a Vice-President of the company and the head of the Lincoln-Mercury Division. Over his years at Ford, he later became Chairman of the Dealer Policy Board and was well liked by the dealers. In 1957, he suffered a heart attack and had to cut back his work responsibilities. Benson passed away in 1978. 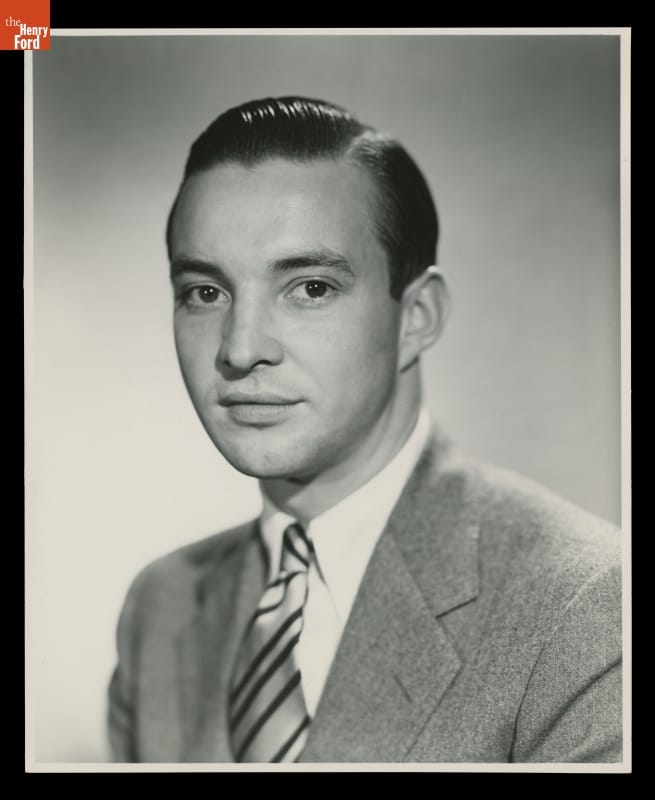